The Naïve Bayes method is one of the most frequently used machine learning algorithms and is used for classification problems. It can therefore be considered as an alternative to Binary Logistic regression and Multinomial Logistic Regression. We have discussed these in previous tutorials In this tutorial we’ll look at Naïve Bayes in detail. Data for the case study can be downloaded here.

END_OF_DOCUMENT_TOKEN_TO_BE_REPLACED

Why getting a data science masters is a great idea in 2021?

Why getting a data science masters is a great idea in 2021?

There’s no doubt that data scientists and their close cousins, artificial intelligence and machine learning specialists are highly sought after in today’s digital economy. Surveys from glassdoor, indeed.com and linkedIn in 2020 and 2021 rank them  as the most in-demand professionals. In particular data science salaries for well-qualified practitioners can match and exceed those of more traditional highly paid professions.

There’s a good reason for this.  While the most successful companies in the world today aim to do what businesses have always aimed to do – create new products and services, sell more of them, serve customers better, drive down costs, generate efficiencies, reach new markets and so on –  what they do differently is use a deep understanding of data and the insights drawn from it to drive their strategies and decision making. The use of science and analytics has enabled them to rise at an unprecedented rate and leave traditional incumbents in their wake.

Because this deep understanding of the power of data is at the core of these organisations and this is also increasingly so in companies that need to catch up, there is a shortage of people with data science skills and knowledge, making data scientists highly valued.

The professional title of data scientist first appeared in 2008, so we could say that data science is a very new profession. Organisations have certainly been collecting and analysing data to inform business decisions since long before then and the data analyst role has been around for some time. But data science as a profession has emerged at the same time as the explosion of data resulting from the internet and mobile computing, the exponential increase in computing processing power, cloud computing and advances in statistical knowledge.

However, beyond this is the capability to use those skills to uncover novel and hidden solutions to problems in a vast array of fields, so data scientists also need a good understanding of business and most often knowledge of specific domains where data science is used. 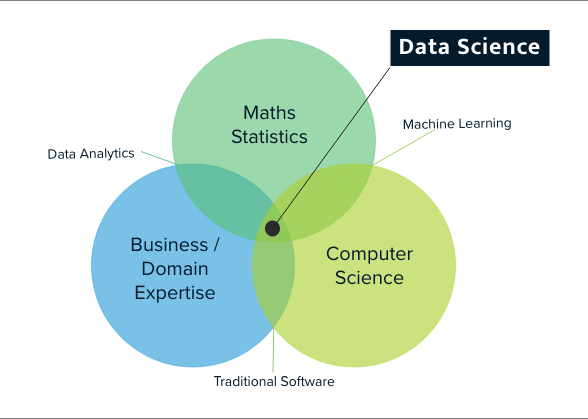 So what does it take to be a data scientist (or a machine learning and artificial intelligence specialist)?   First of all there needs to be a passion for data and numbers, a curious, creative mind and a desire to solve problems.

Data Scientist positions advertised by tech giants, major multinationals, dynamic start ups and specialist consultancies alike generally require at least a postgraduate level of education, even for entry level roles.  Increasingly, a master’s in data science itself, of which a growing number are becoming available globally, is a specific prerequisite.

A 2018 analysis by Indeed engineering, found that 75% of data scientists have at least a master’s degree, and often in a relevant discipline such as computer science, mathematics, statistics or other numerate areas.  Interestingly, machine learning engineers had a similar educational profile.  Indeed’s analysis also found that data scientists had the highest average level of education in comparison with related job titles, including data engineers, software engineers and data analysts.

Data Scientists  also come from the widest variety of backgrounds.  As Chris Linder, from indeed put it “If you ask every data scientist around you what they did before DS, they’re each likely to give you a different answer. Many come from master’s and PhD programs, in fields ranging from astrophysics to zoology. Others come from the many new data science graduate programs that universities now offer. And still others came from other technology roles, such as software engineering or data analysis.”

Industry and academic practitioners agree that a good postgraduate programme in data science should have a core of technical technical knowledge – exploratory data analysis, statistical inference, predictive modelling, machine learning and artificial intelligence.  There is also programming –  a well rounded practitioner will be able to work in Data Science with R or Python, or, ideally both languages.  We may then add to this big data analytics and engineering. Perhaps of equal importance is that the programme requires students to look at challenging real world problems and apply their data skills and thinking to creatively solve them.

There are other ways to learn about data science.  Intensive bootcamps, modular, self directed courses on MOOC’s and specialist courses leading to industry certifications, for example, are all opportunities to get an introduction to data science and beyond.  These programmes give people an opportunity to learn the basics of data analysis, statistical methods and machine learning. They will also give learners a background in the tools and packages used by data scientists and analysts.

However, as leading data scientist Jeff Leek has stated,  “the key word in data science is not “data”; it is “science”.”  Data science is more about using scientific thinking to solve hard problems and gain meaningful insights from data than using the tools and techniques that shorter, less academic courses focus on.  This could be a good approach for those who have already completed a masters or higher degree in another area who want to get into data science, but for those without a higher education looking to enter the field through these options may find it more difficult. The 2018 Indeed Engineering findings referred to earlier backs this up, with fewer than five percent of data scientists having an education up to high school or associate degree level only.

Universities around the world have begun to recognise data science as a discipline in its own right and as a result have introduced specialist post graduate science data science degrees.  This option is the most likely to bring success for prospective data scientists and their employers, but the challenge can be the cost and time it takes to complete a master’s degree, particularly for those currently in employment.

The fees for a data science masters online from a reputable university in the US or UK start at $12,000, but are typically around $20,000.  For top ranked schools an online masters degree can be upwards of $40,000.  Studying full-time, a student can expect to spend 18 months to two years and part time, between two and three years.

One alternative to this is to study a postgraduate level diploma that gains them advanced entry into a master’s degree. One such diploma is the UK awarded Qualifi Level 7 Diploma in Data Science, which carries 120 UK credits and represents two thirds of a masters degree. This not only gives a choice to complete a data science masters degree at a wide range of universities but also provides an opportunity to save both time and cost in doing so.

END_OF_DOCUMENT_TOKEN_TO_BE_REPLACED

Firstly, we’ll recap our earlier case study and then develop a binary logistic regression model in R. followed by and explanation of model sensitivity and specificity, and how to estimate these using R.

END_OF_DOCUMENT_TOKEN_TO_BE_REPLACED

Multiple Linear Regression (MLR) is the backbone of predictive modeling and machine learning and an in-depth knowledge of MLR is critical to understanding these key areas of data science. This tutorial is intended to provide an initial introduction to MLR using R. If you’d like to cover the same area using Python, you can find our tutorial here

END_OF_DOCUMENT_TOKEN_TO_BE_REPLACED

In a previous tutorial we looked at key concepts in statistical inference. We’ll now look at T Distribution , Kolmogrov Smirnov, Shapiro Wilk, and standard parametric tests. Parametric tests are tests that make assumptions about the parameters of the population distribution from which a sample is drawn. We’ll begin with normality assessment using the Quantile-Quantile Plot (also called the Q-Q plot), the Shapiro-Wilk test and the Kolmogrov Smirnov test. Then, we’ll cover T distribution briefly. Finally, the one sample t-test, which is a standard parametric test will be looked in detail.